Feed my greatest desires while overcoming my fears.  Get my career back in the performing arts.  Become Alive again.  I need to let go of all that is safe & leap into the unknown…
I have always known the amazing quality my parents brought to my life.  They loved my sister & me endlessly.  They only wanted to do the very best.  I am a perfect mixture of both of them.  But in this case, my dad & I are kindred souls.  He hitchhiked through the USA when he was younger & absolutely has a traveling, wandering soul within him.  Luckily for me, Dad always believed in me, even when I wasn’t able to believe in myself.   His birthday was near & he shared that he wanted no other gift but me to finally follow my dreams, put myself out there & not be a patient for as long as I could.  He knew how hard I had worked for so many years, logging in well over 60 hour work weeks.
The greatest gift life has given me is my parents.  I needed to show them that the greatest gift they had given me was my life…to live.  How could I not embark on this journey?!
Action Plan:

The items that I was attached to most had to go first.  Pathetically, I realized my costumes were in that category.  My costumes are a staple of who I am.  I held onto them longer than I should have but a ridiculously awesome moment presented itself:  Driving near Boston Medical Center I saw a homeless man struggling for warmth & begging for food.  I kept food in my glove compartment so I looked to see if I had anything.  Instead, I saw my Scooby Doo costume staring back at me.  I offered him the costume to wear over his clothing.  He was understandably hesitant at first but he did put it on after I was insistent about the level of warmth it offered.  (I actually went back to look for him before I left but couldn’t find him).  I hope he found the same freedom & fun wearing that costume that I did, but worst case scenario is that at least he stood a much better chance of keeping warm for perhaps a bit longer. Letting go is certainly much easier when you identify your wants vs. others’ needs.

Next up, the rest of my belongings.  Thankfully it was an amazing experience.  I found a way to give back to others by using an organization that worked with woman and children that were transitioning from the shelters to new homes.  My belongings would start their new life along with them.
I had a few days of living back at my parents’ til I would depart on my next journey.  Nothing could stop me now.
…or LIFE could.  Life had a different path planned for me.  My departure changed so many times due to BS medical sh*t.  The doctors kept wanting to schedule more appts or tests.  I started to internalize the date changing as a failure on my part.  I associated the postponement with all the other things in life I have had to discontinue “until further notice”.  I almost lost complete hope that this journey would ever start.   I was so embarrassed to see friends after the departure dates I made up in my mind because I thought they would think I chickened out and failed.
Medical stuff is exactly what took me off the road from performing & kept me in Boston for the past few years.   Many attempts to get back to performing full time or make a move were put to an end immediately by the medical chaos in my life.  “So why would this time be different?” I began to believe.  I certainly felt like I was losing all hope.
If this journey couldn’t begin I feared that I could no longer maintain any sort of happiness, drive or reason to smile with passion.
As life presented another struggle, it reminded me of the amazing friends with whom I share my life.  My friends knew of my desire to take on this journey & were supportive of an exciting idea, but I think they also knew that I truly needed this to happen in order to take control of my life again.   When you have been so controlled by elements outside of yourself such as chronic illness or tragedy, you don’t have any control for the most part.  When I was handcuffed to my healthcare I was never in control.  I needed to have room for myself to grow, fail or completely be lost.  I didn’t fear failing but I feared not having the chance to do so.
I finally set a date after a few more doctors’ appointments.  They could call me on the road to discuss anything further with me.  Staying a moment longer was no longer an option.
I hate the quote “everything happens for a reason”.  I have a hard time accepting it when I hear stories about what many have experienced.  I do, however, know that I can take control of my experiences and give them purpose for myself and for those around me.
So after many failed launches, I packed the Vibe, started the engine and with my parents’ blessings & love I left their place on a Friday morning in late January.  I drove away struggling to read my GPS because my eyes were filled with tears–tears I only later identified as fear, sadness, happiness, excitement and every other emotion you can imagine when you realize your entire world is just you & a few items.  That you have let go of everything.
After a day of driving I looked into my rearview mirror at myself.  My eyes started to well up.  Looking back, I still don’t know if it was the realization that what I had visualized for years was now becoming my reality or if it was the reality that I was now my ONLY companion for however many weeks lay ahead.
I couldn’t decide whether I thought this was a gift I was giving to myself or a punishment.
I couldn’t hide behind an amazing idea & delay creating an amazing story any longer.  I had to make it happen–I had to find the only voice I could depend on to get me to where I wanted to be.  I had to start to find that love within.  So I started the engine, got back on the highway and laughed at myself.
Where the hell am I going?! 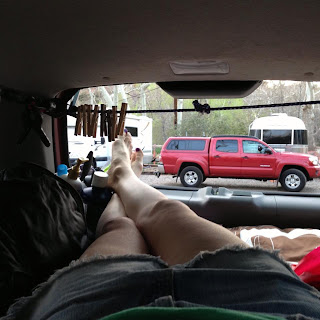 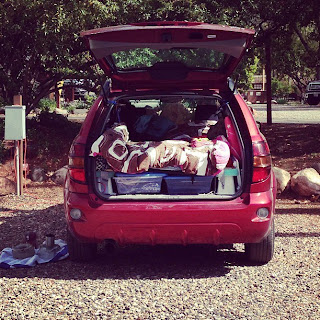